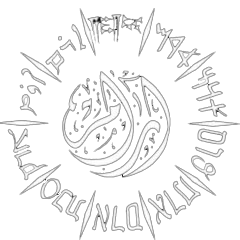 ARAM aims to study all aspects of Syro-Mesopotamian Civilisations

However, ARAM does not confine itself solely to Aramaic culture, but attempts to deal with all cultures of the geographical area influenced by Aramaic culture, i.e. the Syro-Mesopotamian region, or the so-called Fertile Crescent. Consequently, ARAM aims to study any subject related to Syro-Mesopotamian cultures, from the beginning of history up until the present time.

ARAM was founded by Dr Shafiq AbouZayd in 1986/87 at Oxford University, where the new society found wide backing from the Oriental Institute and its staff.

In 1989 the first volume of ARAM Periodical was published, and the first ARAM International Conference was held, on the subject of the Nabataeans and Petra, gathering over 70 scholars from various Western and Middle Eastern universities. In 1990 the papers of the Nabataeans conference were published in Volume 2 of ARAM Periodical and they constitute the latest word of academic experts on this topic.

In 1991 the Second International Conference of ARAM was organised on the subject of the Syriac and Arab cultures during the Abbasid era in Iraq, and its papers have been published in Volume 3 of the periodical. The same year, 1991, saw major changes: Dr AbouZayd set up ARAM Society in the United States of America, basing it at Harvard University, where he found encouragement and a warm welcome from the teaching staff of the Near Eastern Department.

The Third International Conference of ARAM, held in September 1992, was on the subject of the Decapolis, the largest ever meeting on this topic. Around 65 scholars assembled to study the history and the identity of the Decapolis during the time of the Roman empire in Syria. Since 1994 the ARAM International Conferences have been held at regular intervals at Harvard University as well as at Oxford University on different subjects related to the Syro-Mesopotamian civilisations. See more details about ARAM Periodical and Conferences below.

ARAM draws its name from Aramaic, which was a focal point of Ancient Syro-Mesopotamian cultures. However, ARAM does not confine itself solely to Aramaic culture, but attempts to deal with all cultures of the geographical area influenced by Aramaic culture, i.e. the Syro-Mesopotamian region, or the so-called Fertile Crescent. Consequently, ARAM aims to study any subject related to Syro-Mesopotamian cultures, from the beginning of history up until the present time. In this respect, the first ARAM conference, on the Nabataeans, the thirdood among its people, with their different social and spirituals beliefs.

It is a society for everyone who shares an interest in its identity, irrespective of race, religion or status. As a non-political society, ARAM can never allow itself to become involved in any political activity, and indeed the ARAM Committee has the right to cease the membership of any member of ARAM who uses the Society for any political purpose or does not respect its inter-religious identity. See more details about ARAM Fellowship below.

ARAM keeps regular contacts with more than five thousand addresses all around the world, most of them universities, institutes and scholars in Near Eastern studies. Our aim is to go beyond Europe and the USA and very soon we hope to see the birth of ARAM in the Middle East.

ARAM publishes a bi-annual periodical, one volume in two issues, in which the Conference talks along with many other related articles on the Syro-Mesopotamian civilisations appear.